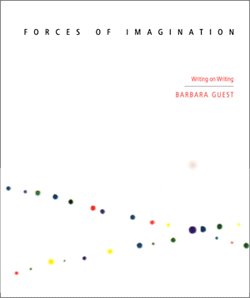 
"Already the shades are listing as Modernism begins to cross the border, exulting in a new freedom called the past. The forms of poetry, too, are restlessly releasing themselves." (from Guest's essay 'Radical Poetics and Conservative Poetry') This book is subtitled "Writing On Writing", which allows in poems, little scrap-books, essays which are granular with aphorism, and various talks. The crossing lines of coloured drips on the cover are by Laurie Reid, who also contributes a number of other sparse visuals within; Guest's work responds particularly well to fine surroundings, an atmosphere of enchanted attention.

There is one piece which might be called literary-criticism, an examination of the poet H.D.'s Imagism as distinct from Pound's formulations and instructions. Elsewhere there is a fragment on how Tennyson set the young Guest on the lofty path towards being a poet; an excellent sentence on Mondrian's 'Composition with Blue, Black, Yellow, and Red' of 1922 (for writings on art see Guest's Durer in the Window, Roof Books, 2003); a short piece which differentiates a tale from a story; another one on what a surprise is; and another on the use of an archaicism as a prop, a "piece of the past/." Rilke's letters on Cezanne are read as poetics; the problems of translating Machado de Assis are briefly mulled.

The short pieces are often ironic directives on the art, "My laughter is bittersweet and brings us closer to irony, the mole of poetry. Irony is a coagulant of pain when the subject of the poem (the interior meaning) begins to draw blood." This essay, 'A Reason for Poetics', also emphasizes the imagination, which has many forces: "The conflict between a poet and the poem creates an atmosphere of mystery. When this mystery is penetrated, when the dark reaches of the poem succumb and shine with a clarity projected by the mental lamp of the reader, then an experience called illumination takes place." The reader is converted to a poem, or is left in the dark.

"The structure of the poem should create an embrasure inside of which language is seated in watchful docility, like the unicorn." The imagination "sees" (Breton's "to imagine is to see") and through these Aesthetic windows, poems, the reader sees the spectacular. The structure is an infinite plasticity, "A poem has not only a voice, but a mouth", that is, a physical mouth working on the page. The radical poet must constantly invent new scaffolding for the the poem, "in the defenestrating process of saying something new the structure of the poem suffers and the poet becomes engaged in a search for supports that will hold together the poem; and these supports are so new themselves, like spandex, they must be marketed to realize their future." ('Radical Poetics and Conservative Poetry')

Often, in these pieces, it is in short runs of phrasing that Guest generates an intelligent glitter, and we are briefly converted to her thought. The central poem reprinted is 'The Blue Stairs',

Reading stairs
as interpolation
in the problem of gradualness

and, gaining the blue landing at the top, one takes the lead and goes back to Guest's poetry collections, in particular Rocks on a Platter (Wesleyan, 1999), which is also subtitled 'Notes on Literature', a volume more satisfying that these writings on writing as it was written as a book work. Forces of Imagination contains plenty of its own joys, however, though it is single pieces, and particular sentences, that tend to stand out rather than the book as a whole.

One of the pieces included is Barbara Guest's translation of Horace's Ode III.13 which famously celebrates a spring named Bandusia:

When he writes "uitro", like glass, we must remember that glass for Horace was a translucent thing, but it was not clear. A deep mirror. Gladstone's translation

Guest begins by remaking the poem,

There was a blend
More than language
Tossed onto the landscape.

These are the splendor falls (Tennyson), tossed everywhere. When Horace sacrifices a kid goat -

- a splash of red, the blood of boundless - eternal - life enters the poem: Guest whisks that red

An acreage of water,
A mirror,
The Fountain of Bandusia
Crimsoned by the goat
Sacrificed to its splendor.

and this can be compared to Eavan Boland's more convoluted eddy:

And tomorrow we will bring
A struggling kid, its temples sore
With early horns, as sacrifice.
Tomorrow its new trumpeting
Will come to nothing when its gore
Stains and thaws your bright ice.

The waters are "loquaces", talkative, though one might be tempted to say, the water gets loquacious. It gushes. Arthur Hugh Clough gives us a fairly typical rendering -

Of the famed fountains thee too one shall make
Thy poet's verse, that tells thine ilex crowning
The impendent rocks, from whence
Thy babbling waters leap.

- but Guest cuts back the supports:

The brilliance of Guest here is that she avoids having to say "babbling" at all - instead a reviving jet comes straight at us, crystalline: "Splashed odes". The art of poetry is one of jars, Stevens' 'Anecdote of the Jar' and, behind that factory-line object, Duchamp's own 'Fountain' of art. The spring at our feet.