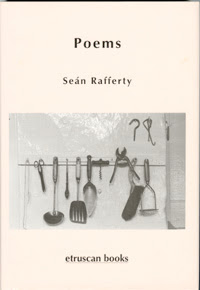 The poems of Sean Rafferty (1909-1993) were most recently published by Etruscan Books. Writing largely in obscurity, Rafferty created a body of work that was read, praised and supported by such figures as Gael Turnbull, Sorley MacLean and Ted Hughes.

Ahead of the anniversary of Rafferty's birth next year, "Intercapillary Space" invites you to contribute a blog post, letter, closely argued essay, postcard, diary entry, painting or some other reaction to Rafferty's work for a Blog Symposium planned for the week beginning on Monday 23rd June, 2008.


If you are interested please email Alistair Noon - alistair.noon@gmx.de