Ted Berrigan. Plagiarism and / or the Found Poem. A Creative Writing Lesson.

Ted Berrigan had a habit of writing on and in the margins of books. A copy of Roland Barthes Writing Degree Zero, which he gave to me, is heavily underlined in black biro and annotated in parts. The final nine lines are boldly marked and an asterisk placed after new and before Adamic, 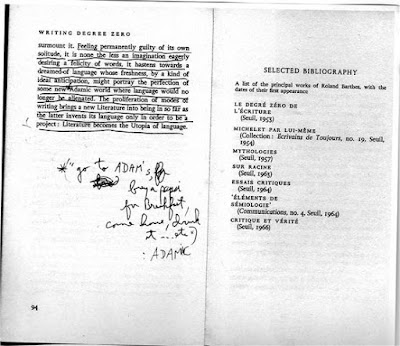 Feeling permanently guilty of its solitude, it is none the less an imagination eagerly desiring a felicity of words, it hastens towards a dreamed-of language whose freshness by a kind of ideal anticipation, might portray the perfection of some new * Adamic world where language would no longer be alienated. The proliferation of modes of writing brings a new Literature into being in so far as the latter invents its language only in order to be a project: Literature becomes the Utopia of language.[1]

It seems quite ironic here that Barthes, writing specifically about French literature, has touched obliquely on such American themes as a Utopian (new) world and a fresh Adamic American world – these themes dealt with by R.W.B. Lewis in The American Adam. Berrigan sees rather a different Adamic than Barthes or realises a new definition of what he's already experienced. He writes, *"go to ADAM's, buy a pepsi for Breakfast, come home, drink it...etc" :ADAMIC. The significance being that every (each new) day is Adamic. This is a word for word quote, except for the change of capitals between p and B, he's even used quotation marks, from Personal Poem #2,

gone to work Ron to class (I never heard a sound)

pants birthday shirt go to ADAM's buy a Pepsi for

but the first appearance of these lines are in Sonnet LXXVI. Alice Notley notes in The Collected Poems of Ted Berrigan (p675/676)[2], that Personal Poem #2 is Sonnet LXXVI in The Sonnets, but if we look closely we realise it isn't! Why include the same poem twice? There are subtle variations and changes between the two – the obvious change is in lineation – the minor change is in the capitalisation, both pepsi and breakfast are lower case and ADAM'S becomes completely capitalised; we have three versions of the (more or less) same words,

I wake up back aching from soft bed Pat

gone to work Ron to class ( I

never heard a sound) it's my birthday. I put on

pepsi for breakfast come home drink it take a pill

There's also an alteration in the line lengths and name ordering. In LXXVI it reads

(O'Hara more personalised than the others?)

and in Personal Poem #2 it reads,

Back to books. I read poems by Auden Spenser Stevens Pound and Frank O'Hara

which changes the weight of the sounds making the e's more resonant and the alliterative sibilance stronger.

But the major change is that LXXVI has no direct references to time at all. Time was a major preoccupation of Berrigan's poetry, time and memory, relationships – the living and recording of it (its re-arrangements and re-orderings, its re-creation, the minutia, the significance of the everyday).

In Personal Poem #2 Berrigan is 27 – that makes the year problematically 1961 and the time is 11:30 in the morning (possibly!). The inclusion or exclusion of these details is startling if they are accurately biographical but then in Sonnet II he's fucked til 7 and he's 18!

A brief glance through The Sonnets will not only indicate Berrigan's influences but also his sources (their words and lines). The French poets figure pervasively, Guillaume Apollinaire, Max Jacob, Henri Michaux and significantly Arthur Rimbaud.

Possibly prior to The Sonnets Ted Berrigan wrote The Drunken Boat. Nowhere in my mimeod copy, drawings by Joe Brainard, is there a date or a publisher given (Alice Notley dates it as early in 1962 and pre The Sonnets ) neither does it say it's a translation of Rimbaud's Le Bateau ivre but it does say, A Homage To Arthur Rimbaud.

Presumably this is an appropriation (whether some translators think of the work as theirs rather than the original author's is a moot point – Tim Atkins, as well as writing poems like Berrigan's has also written poems by Horace and Petrarch!)

As I descended impassible streams

Shrieking redskins hung them up

Naked, to use for target practice!

Berrigan's translation Le Bateau ivre then turns up in The Sonnets, lines sprinkled here and there, whole translated stanzas are incorporated territorialising and reterritorialising the fluid multiplicity of the work (collage now seems an inappropriate term). Thus a reader, ignorant of Berrigan's appropriation, wouldn't know whose lines they were / are reading other than Berrigan's. Sonnet LXX After Arthur Rimbaud is an unbroken passage of the 16 lines, four individual stanzas, from line 17 onwards of Berrigan's The Drunken Boat (not collaged and not multiple in itself but the multiples fold both backwards and forwards from this point).

Appropriation in Berrigan's work is rife from the beginning and has had attention drawn to it from various people, Daniel Kane and most moralistically and condemnatory by Peter Robinson[3]. Robinson points out that Sonnet IV begins with the opening line of Rilke's Herbsttag but a flick through the Notes (p665 / 721) of The Collected will provide the myriad sources for many of the poems. Likewise the (supposed) method(s) of construction, particularly of The Sonnets has often been elaborated on. Notley points out the influence of 'Dada and by collage and assemblage', she also mentions Burroughs and John Cage. Likewise Charles Bernstein has called them 'part collage, part process writing and part sprung lyric' But it's not my point here to be drawn into arguments about method or even sources of method (or even content or technique sources / influence – the old bone of being an inferior O'Hara imitator[4]) but rather to point to the practicalities of the sources – an empirical, practical source, its facticity, as with Le Bateau ivre.

Where the Ceiling Light Burns is on p408 of The Collected Poems of Ted Berrigan. This poem first appeared in The Human Handkherchief No.5 Summer 1975,(it was written in the Summer of 74 in Wivenhoe). Also in that issue are poems by Aram Saroyan, Ron Padgett, Anne Waldman, Iain Sinclair, Simon Pettet, John Seed and David Chaloner. Where the Ceiling Light Burns is creditited to Ralph Hawkins and Ted Berrigan. The title was supplied by Ted Berrigan. I typed out the poem, on Berrigan's instigation, of the first ten line openings of ten poems of my choice. Message by Allen Ginsberg, The Crystal Lithium by James Schuyler, Next Door by Jim Carroll, The Moon Upoon The Waters, by Tom Raworth, Second Poem by Peter Orlovsky, St. Paul and All That, and Yesterday Down at the Canal by Frank O'Hara, Anniversary Poem by George Oppen, the fever & obscurity of your organisms (first line and without a title) John James and finally In the Face of a Chinese View of History by Charles Olson. If I now typed out all the second lines would it work as a poem – I doubt it. This ability to see works within works has an incestuousness about it. But these taboos are easily broken by Berrigan and have provided a valuable field of poetic resource – it may be simplistic to say he could see immediately and incisively what others poets where up to, in order to use, stretch and innovate on what he found.

Line 10 in Berrigan's numbering, that their flesh is boiling, does not turn up in the final poem.

Written out as it is numbered the poem appears as,

what they are afraid of

being unfit to live

being ill with a mysterious disease

that they will not recover

that they have committed an unpardonable sin

that they have stolen something

that they are in hell

that their blood has turned to water

that they give off a bad smell

that their flesh is boiling

that children are burning

that they are starving

that evil chemicals have entered the air

that they are tools of another power

In the final version Berrigan besides altering the numbering (the unknown is of course that the numbering might have had a different purpose other than the order of line sequence) Berrigan makes minor changes. He capitalises the lines, adds fullstops and adds a their to that children are burning.

Next to the original the final version reads,

From A List of the Delusions of the Insane

What They Are Afraid Of

That they are starving.

That their blood has turned to water.

That they give off a bad smell.

That they are in hell.

That they are the tools of another power.

That they have stolen something.

That they have committed an unpardonable sin.

Being unfit to live.

That evil chemicals have entered the air.

Being ill with a mysterious disease.

That they will not recover.

That their children are burning.

Berrigan's initial order of 1 to 14 now reads 12, 7, 8, 9, 6, 14, 5, 4, 1, 13, 2, 3, and 11. This is a more powerful creation than the initial recognition of another (different) poem within a poem (within a found text!). One can only suppose that Antin's version is more representative of the original (found) text than Berrigan's and Antin has obviously interfered with it less – many of Berrigan's texts have transcended the initial found stage by the fact of already being (in most cases) poems (they are meta-found texts!). Berrigan has paid specific attention to the lineation – the balance and quantity of the lines and the system of sounds in such a tight framework – the use and extra inclusion of their is crucial to the extended flow of the aptly chosen the final line.

[1] Writing Degree Zero, Roland Barthes, Jonathan Cape, 1970
[2] The Collected Poems of Ted Berrigan, University of California, 2005
[3] Peter Robinson, Jacket 34, No Apologies and No Prizes
[4] Robinson makes much of this in his article and John Wilkinson has also done so previously. See my article in "Intercapillary Space", Underwhelmed, Ted Berrigan via John Wilkinson.

Comments:
Thanks for sharing the page from Berrigan's Barthes!

Regarding Adamic language: this is a dream that only became American after a few thousand years. See, e.g., Eco's survey, The Search for a Perfect Language. My wife wrote a book about that dream and American poetry--she'll enjoy Berrigan's twist!

Berrigan's stance isn't new. It comes from Emerson. And Emerson got it from Nature. But, true too, that each generation needs writers to remind them of this notion, which is not new, but is great.

The implication of much of Berrigan's work is that our concept of discrete "authorship" is depleted and diluted by the experience of literature. We are the sum of all that we have experienced, and in the case of someone immersed in the history of Western Literature--specifically modernism and surrealism etc.--this may be expressed through a multitude of echoes and quotations and references. Like drilling down into a footnote of a footnote of a footnote. There's no one integrated "source" or origin for a feeling. It's a shared, social condition which language bears all the marks and evidence of. The borrowings and thievery we see in Berrigan piles up and piles up until it overwhelms you. Ultimately, you capitulate to its sheer mass, and accept what language is doing to you, what perception is: A happening, beleaguered by input, afloat on the divine afflatus of sound, babble, sense.

The Sonnets is a work of genius, because it does this, in addition to all the other things it is. Including being, in a sense, a kind of spiritual autobiography of a month's intense, sleep-starved, drug-induced hallucinatory brain-movie.