Elisabeth Bletsoe, Landscape from a Dream 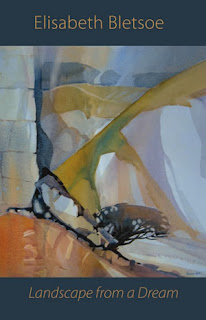 Volumes could be written on this, Elisabeth Bletsoe's intricate Shearsman collection from 2008; here, I won't get much beyond the first page.

intelligence         lies
at the edge of the body
in the skin
along the littoral
feeling:

This is the beginning of the title poem. At the end of the poem there’s a – what would you call it? – a topographic note: “Purbeck coast from Swanage to Kimmeridge”. A lot of my thinking around this book, when I move away from the detail, is about regionalism, which has been a big piece of grit in poetry, with a whole lot of questions around it, since Wordsworth. And of course not just in mainstream poetry. Brixton Fractals is a regionalist book. And a re-envisaging of shape/space/time may be particularly connected to regionalism. Elizabeth Bletsoe’s poetry is full of flying dislocation like a post-avant book, and contrastingly full of careful evocation like a mainstream book, and full of bodies of knowledge unrecognized by the academies, like a hippie avalon south-western book, and in short she is exactly what a modern Dorset poet ought to be. But. Would she, for example, be giving a second thought to Paul Nash's surrealist painting if it had not just happened to incorporate a view of cliffs near Swanage? Doesn't this local repossession of internationalism imply a drastic foreshortening of context? And, by the way, an unsurrealization of Surrealism?

The acuter pressure of this issue in regard to Bletsoe as compared to Allen Fisher is twofold: 1. Landscape from a Dream scrupulously suffixes its poems with locations, and never puts a foot outside Dorset. 2. Bletsoe’s poetry is welcoming and immediately attractive and for all its learning pretty accessible, and I’m sure she really does reach a regionalist audience that includes some people who are more interested in matters Dorsetian than they are in the supposedly wider world of poetry, and that audience is something that most P-A poets don’t either have or want.

The nearest I can come to understanding this regionalism is via homeopathic provings (Bletsoe is a trainee homeopath), which involve an assertion of place as a definite and individual fact, not just something that "happens to be". I "happened to find" this well-documented account of a proving of Stanton Drew (stone circle near Bristol), if you'd like to take it further.

This intelligence of the coast is two-way: here the exposures are what give names to Jurassic sedimentary stratigraphic formations that course through Europe – Kimmeridge Clay, Portland, Purbeck. That geological map is an intellectual construction, true. Kimmeridge Clay is economically very important because of the hydro-carbons on offer. You may think that the poem is aware of this larger context, though it doesn't say so as such.

the weight of the cumulux
hearing:
your tidal breath
filling my cavities
in liquid carbonic interchange

fissility of shale, its
slaking,
plasticising when wet;
relict textures of petechial haemorrhage,

nb "cumulux" maybe isn't a neologism, I don't have the OED to hand, but it is anyway a very rare word, though since adopted by a fast-emerging Canadian player in the cloud-computing market.

nb "shattering with equinox". I first thought to say that this was a neat, Latinate, intellectual way of referring to the rhythms of freeze-and-thaw erosion. Does it ever freeze right down on the Dorset coast-line? More to the point, probably, is the "x" in cumulux, texture, equinox..., visually representing the shattered X-shapes of shale exposure.

On to the next page, and we're swimming.

walled up inside
translute bricks of water

making a slip,
slipping in
grafting on a limb
to a limb, fused
& drifting
through the amnion
in marbrine light

above our bodies,
the underneath of the surface envelope
is an ametrine laminate

Landscape from a Dream is, kind of refreshingly, just a bunch of poems and not a project. I don’t mean this is rare in poetry generally, but it’s rare in the kind of poets that I like to read. There are basically six poems, and each one is a world to itself, and four of them, at least, have the dumbfounding clarity of recently-witnessed miracles. Apart from “Landscape from a Dream”, the others are:

“The Separable Soul” which goes into a kind of sustained take-off, as if the swan’s water-beating were effortless.

“Birds of the Sherborne Missal” which is a kind of reinvention of the art of illumination, in words.

Four women-from-Hardy-novels monologues – (they don’t have a collective title) – not very reminiscent of Hardy, or of novels. In fact a transformation, whose distance from Hardy is there to be measured and wondered at.

swollen, we are twin horns
you standing at the mouth of a shining-walled labyrinth

At some point I planned to compare or to contrast this:

their flames
Light a sycamore-key, turning it to old gold
As it unicycles gently down to the table.

My original point, I supposed, was to compare the sensuality of that well-placed Latinate word. But now I think it was because Redgrove is also a poet of transformative miracles. Either way the comparison is inevitable and Bletsoe must have been dogged by it all through her career. OK, so it's lazy thinking, and I just love to quote Redgrove. Anyway, her poetry stands the comparison, doesn't it? As the "Hardy" poem epitomizes, regionalism becomes a distant thing because of the action of the poem.