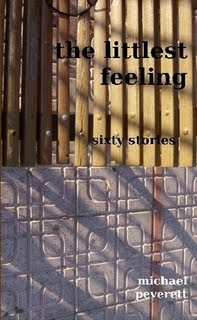 Colin Herd has reviewed The Littlest Feeling in 3:AM Magazine.

I wrote a little about the publication process here.


A tea-light burning in its pool.

A flame was, on the whole, one of the more bright things. One did not, on the whole, consider a flame at all remarkable for its invisibility. But, the base of a flame. There's something obscure about that. You would like to get right underneath the flame and see its bottom whole and undivided, but you can't get there, you can't find a standpoint to gaze at it from. You can't see the base of a flame. Is it even flamy, or is it only a transparent discharge of hot gas?

I wanted, she explained, to make it as un-Christmasy as possible. She ran the tap, washing her feet in the bidet. But it was difficult, without seeming to mean something else. You have orange and if you put black it's Halloween, or if you put green it's a market. If I can I'm going to spend some time on it over the week-end.

And besides there are satsumas, he tried to join in. She changed the subject.

So you've finally managed to dispatch your latest collection of tea-lights.

I know. It's like killing an ox isn't it?

The pan was too big to go in a washing-up bowl. He filled it with hot soapy water and desultorily washed up a wooden spoon and a fork in it. The pan was its own washing-up bowl. Alarmed at being alone at the back of the shop, he cut it short. He tipped the pan by one handle, emptying a gush of water into the dublin, while he wiped quickly underneath. It still felt greasy. He turned the pan right over and wiped some more, but this was the kind of cooked-in grease that you couldn't altogether remove.

A gravy-stained plate with sprouts, a couple of sozzled parsnips, and a roast potato with a skin of leather. Someone had eaten only the innards of their cod in batter. The batter casing had found itself marooned on top of the remains of the roast dinner, the leftovers were combined onto a single plate so the other plate could be stacked beneath. Stack 'n' Go. Golden crispy crumb on the outside; the inside was white and gelatinous, something you should never see. For some reason he imagined trying to market it: Fisherman's Roast. That was a commercial art; he admired it. No status-seeking, no fucking shit. But it was an art. You called a cake a "Fruited Square". You called a candle a "Scented Pillar".

He was aware that he was crashing. He had simply forgotten his timetable. You have to crash sometimes to go again. It was something to do with the pineapples in her frieze. He knew if she called he would walk through the open door.

Driving at nightfall in the warm car, he was fascinated by the silent shrubs on the embankment; a desperate place, out there. If you did stop the car at a lay-by and took a walk into that chilly thicket, it would be different. Because you were in it then. To be inside something, or to contemplate it from without; always different. Both valid views. You couldn't be inside everything. Two views. But not infinitely many views: just two views. There wasn't a continuum of opinions about anything. You can live and breathe opera; you can walk past the doors with a folded newspaper and hear the pigeons wheel in the square. Distant roar of a stadium: they've drawn level! Human experience organized itself into the two views: the external one, the internal one. The thing that generated this pattern was an aspect of the thing itself, its boundary. Like a cell wall. Death is the breakdown of cells. An art still lives while someone can still get inside it. But you have to get outside! Inasmuch as it still lives, the people die. But you must get inside something. A home to go to. Like a dialectic.

I don't understand you, he said. I've come to a decision, he meant.

You don't need to understand it, I don't.

I want to have a proper talk about it.

It's too late tonight.

I don't mean now, I mean. He tailed off.

There's a machine, you know.

I know. I find it therapeutic.

She hung up the tea-towel.

I'm warmer tonight. (She meant, it doesn't matter about your decision.)

Oh this poor plant! It's completely potbound! I neglect everything.

That's how it goes, I know.

She didn't think he did know. His good nature was what she liked about him. He had a happy disposition. But that was because he wasn't driven. Where after all was his portfolio? Where was the stupendous stuff, the stuff that mattered? She had believed in it, but the more she probed, the more elusive it seemed to become. What was he working on now? His binders contained only dust-covered juvenilia. And then what? He spoke as if he was on the verge of finding something out. He talked as if she could help him lay some final chain of fire across the vast foggy continent that brooded above his temples. He implied there was a project. But the pattern of his day had long been settled; the latte, the Independent... There was never a time when he actually did do his project.

And consequently, though he would not admit it, he did not love artists. He worshipped art, he lived in art. Artists disappointed him. With all their narrowness, ignorance, hapless clichés, political infighting, childish materialism... how could such people as these make art? Somewhere far down in his green depths, something that might not surface for many years but one day would stare them both in the face, he hated her. Or he denied what she did. He minimized it. He put up with it. He said nice things about it. He never quite admitted it. And now she saw that these patterns were already forming, in these first few hours.