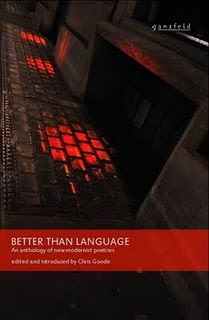 I've said at one time or another that I don't like anthologies, but that doesn't mean I don't buy them and read them. The latest to arrive is Better than Language, Chris Goode's gathering of thirteen poets who are keeping the winter alive around London. (There's something paradoxical in my constantly encountering Chris, who is so identified in my mind with performative poetics and inter-art miscegenations, in such traditionally reader-oriented contexts as, well, introducing a poetry anthology. It's not his fault that his blog makes such compulsive reading, but it sure does blur the message!) One of the things about anthologies that I don't like is that it encourages commentators to make sweeping statements about the cultural scene, to talk about a new generation and to compare them with previous bunches of alt-poets during the heroic era. And nearly always that comparison is going to be unfavourable because of built-in assumptions around the past, i.e. because Bob Cobbing and Bill Griffiths are fucking gods. (I do mean that.) Whereas, you know, these guys have uni degrees and drink lattes and have iPhones. Probably. And they're still alive, too. But this kind of cultural commentary is all too easy. Reading Anna Ticehurst, Francesca Lisette, Jonny Liron, Linus Slug, Steve Willey and the rest is not quite such a stroll in the park. I am at the stage of coming to terms with it. I don't know if it is interesting to see my initial notes: the problem with publishing such notes is they get taken seriously as judgmental statements when they ought to get taken seriously as market research data: but I want to post this while the book is still new. And there are no gimmes here, so I've got to risk being stupid. It's exciting to realize how many of these poets have appeared in Intercapillary Space at one time or another (click on the links).

Anna Ticehurst - nothing on the surface of these poems, all in the intense detail of the statement; prose dismissed as "a greasy parlando", which gives you some indication of her poetry's sensuous intelligence: e.g. transposition of melody-lines, the rubbing of cheeks, the shape of Kinder Eggs, each sensually realized; these become the components of the statement, which always inhabits a compromised social structure, e.g. a tweezed eyebrow pleasantly compared to the fringe of a shanty-town along the manicured horizon of leisure.

Francesca Lisette "Casebook" proposes the form of a Patient/Doctor dialogue: i.e. just where dialogue is especially problematic in both directions, so it immediately turns into a non-comprehension aria. Favourite line: "if answer could be detached like sprats in a blanket, care only for the open woods of history". See also: Edmund Hardy's note.

Joe Luna - How to reconcile the solidity and the breadth of his other work with the apparently delimited fragility of these poems of love, friendship and absence: what is that saying to us, seemingly in reproof? "if yes subtends a sharp declension metered out to that best part where we possess more brutal happiness or as we sleep sequestered wet reload" (breaks omitted). Within this mortar lies R136a1 and a furnace of god-making, and yet we are only talking about it; that, or something like it, seems to be the paradox contained in the poem's "if".

Jonny Liron - as you might anticipate, this is the most committedly performative work here, in fact it's impossible to read this without being invaded by the sense of a performance going on inside and in front of you. (FL titles her poem "for performance" but that only emphasizes what a readerly place we're coming from.) Some people take "performative" as code for "only bears reading once": that isn't what I mean to imply here; a second reading in fact opened a few blooms across the blustery field.

Josh Stanley  2  3  4 He writes about Earth and Heaven (but not really), and I rate his stuff, it feels very open to dense reality. I'm not doing in depth commentary here, but Peter Larkin showed what can come out of that in his review of Stanley's Glogy.

Jonty Tiplady - In the Introduction Chris Goode wrote a bit about "synth pop": Jonty Tiplady is the best fit for the "pop" part of that equation. His poems are smart and shiny and play through pop culture, and they are pop culture. The first time in the book that I suddenly remember about the existence of John Ashbery. Postmodernism is where 20th century poetry begins. (What used to be called Modernism - first-generation Modernism, I suppose - doesn't interest me half so much: just a sickly offshoot of Edward Dowson. What happened in the 1960s is a much more pressing issue for me than what happened in 1910.)

Linus Slug - gets thoroughly filthy in "FrassBuik", but also elegant; elegant too are the "ninerrors" included here, blotted and dotted nine-line scenes of remarkable extent. (By this stage in the book, comparative immunity to Sussex/Cambridge influence begins to definitely feel like something I value.)

Mike Wallace-Hadrill - Sequence "Oxytocin Nasty" in 14 linked poems, generally playing out neurotransmitter, chemical, mind-altering material with milk and reward system and brutality. The kind of poem where you have to Google most of it to get started, in other words it is made of names not descriptions, but this does produce a very clean and unwavering line.

Sarah Kelly bent intimate short lines, weight and heat shadows. Engraved, eroded, no titles left. Nothing left but the sound, the joyous and aching sound: "to compare our / fahrenheits / our barrens and our / heights our dusts and / driveways".

Steve Willey - with "Slogans" we turn a corner and unexpectedly come face to face with Content in its most up-close bristling troubling aspect and Layout in its most directly eloquent mode. Poet of huge resource, and to that extent feeling timeless. His first poem has the stylishness (though not the manner) of Cobbing, his second evinces London poetry's submerged links with old Objectivism and new Conceptualism.

Timothy Thornton - Read the first page and a half and his power of narrative momentum is plain; astonishingly the persuasive grip of this argument persists while we move through poems where the text becomes progressively torqued - or should I say "tocked"? Thornton creates narrative by the eloquently simple means of ratcheting up the tension with "tock" and releasing it with "ah". And the argument creates space because it composes a landscape made out of both the repetitions and non-repetitions of nature.

Tomas Weber - impossible to say something about his selection in a few lines, so instead I'll talk about large bovines, with which two or more of these poems are connected. "Frigorifico at Fray Bentos" is one of them, fairly obviously; more tenuously "Lakes of the Rub' al Khali" refers to the poignantly ephemeral lakes of that desert, 5-10,000 years ago, once inhabited by long-horned cattle and water buffalo. More tenuously still, "Song of the Big Five" might refer to the "Big Five" dangerous game-animals that members of Safari Club International dream about trophying. The Cape Buffalo is the least endangered of these but also the most dangerous to hunters. The American Bison is arguably the most dangerous animal in the USA; it is curious to reflect that most wild stock contains an admixture of genes from domestic cattle. Human relations with bovines are an inescapably political subject.