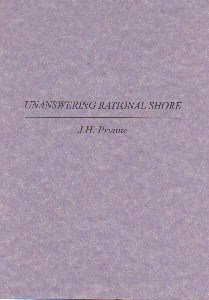 
With the later Prynne style found in this 2001 pamphlet of fourteen fourteen-line poems, the sequence divided into two seven poem sections, each poem divided into two equal stanzas, prefaced by a fourteen-letter invocation or threat

reviewers have registered a problem: go into detail, explicate a phrase, a word or a half-caught reference, and you lose the poem, led out, perhaps, as Ben Watson suggests, to a different text that it's easier to write about. But try to speak of the poem as a whole, sweeping over it, not to tame it but to see it, critically, aslant, and the poem seeps back into the page as white. So, feint left and speak of grammar - which always has the glamour of the nitty-gritty - and there is much to say, particularly as conventional classifications such as "verbs" waver. . . Watson on Prynne defying the reification of parts of speech. Or is it the abessive case? But the breaking-down and re-making of grammar is never a constant - it varies in intensity in this poem. What of theme? Sweeping through we could detect high incidences of words related to skies, stars, management, breakfast, dermatology, engines, volatility exchange rates? Money market jargon scores highly in this sequence. Finally there is safe ground to be found in a discussion of the title. The shore of what? Unanswering to whom?

Everything leaks, but Prynne writes as if any pre-determined movement of the writing would open a haemorrhage, disastrous for the poem's life. The thing that I noticed on a first reading, and which was a significant part of the initial pleasure, was that Unanswering Rational Shore seems to be one of Prynne's wittiest poems:

[...] Licit
banter for an ardency to file acrostic intermission
as thousands would, the cynosure up to snuff

- Behold, we have seen a star in the east. - Yes, but is it up to snuff? Certainly not the "new wandering star" of 'The Numbers', back in Kitchen Poems, "the state of our own coherence".

In the second half of this sequence, "Petrol in search of flame" seemed at first beautiful as a phrase, but there's more:

Petrol in search of flame hardly a ham sand-
wich [...]

Hardly. When a line isn't folded into a moment of syntactic wit, suing for an underlayer's reserve of authorly patina may seem persuasive, though this is impossible at any point, title in, and impeccably so. The poem attempts to create a vigour of relations out to the world, its discourses and usages.

I see that there's time (before I must catch a train) to go back and briefly essay two of the approaches underlined at the top: looking at a single phrase (or stroke?)and following a passing reference out of the poem.

Each who yet cares to corrupt anterior traverse
settlement by booking in pairs, by attainder marks
upsets the project alembic, the debate for hate
to make open clause upon renown in folded paper
dirt cheap, split option pudgy cheeked. Costive
profane credit. Flying starts. The likeness in
white was nowhere near exact. Spectrum count

manicures a trickle of futurity, the sun in splendour,
for so 'to thee no star be dark'. Arising now
by flares and plumes surrounded, who struts up
like potted meat to deliver, oh baby dowse now
the sparkle of glad diatribe, to pay your even way
and never think to blink in theurgic assessment,
granted by ultra-sound as a perfect sunny day.

This opens with a lyrical seal - "Each who yet cares" run into "anterior", usually associated with technical talk of the eye or skull, which is then followed by legal terms, holiday discount, an experiment, and a trading possibility fused into a typical description of a child's face. This is what I mean by a vigour of relations; a reading pushes a counter of attention through them, and picks up positionings. This thought, "The likeness in / white was nowhere near exact", is troubled by the differences between a likeness and an exact likeness. It sounds nearly as absurd as precise. Rhymed thought-jingles are coined - think to blink, debate to hate - while the glad diatribe is the glad hand of which institution?

The quote, 'to thee no star be dark', is Shakespeare and Fletcher, The Two Noble Kinsmen, a play in which much is made of legal terms - phrases uncontained as a river bank suing the flood-water for damages...

[#] Michael Peverett on Her Weasels Wild Returning at "Intercapillary Space"